Shanti Stupa of Dhauligiri is also known as the Peace Pagda. Dhauligiri lies at a distance of 7 Km from Bhubaneswar. As one travels from Bhubaneswar to Puri, one finds Shanti Stupa. The word 'shanti' in the name itself suggests peace. Since King Ashoka adopted the path of peace and tranquility and resorted to Buddhism, he laid the foundation of Dhauligiri Shanti Stupa at a place which is known for the end of Kalinga War. Here, one finds the edict of Lord Budddha which is visited by numerous Buddhist devotees.

The construction of Shanti Stupa of Dhauligiri was assisted by Fuji Guruji and therefore, the place became the place of devotion and worship for various people belonging to different generations. One can also spot a number of stupas, chaityas as well as pillars whose foundation was laid by King Ashoka. There also exist a number of edicts that display King Ashoka's intention to promote joy, peace and contentment all through the world. And over the edicts, you come across a rock cut elephant that is considered to be the earliest Buddhist sculpture in Orissa. 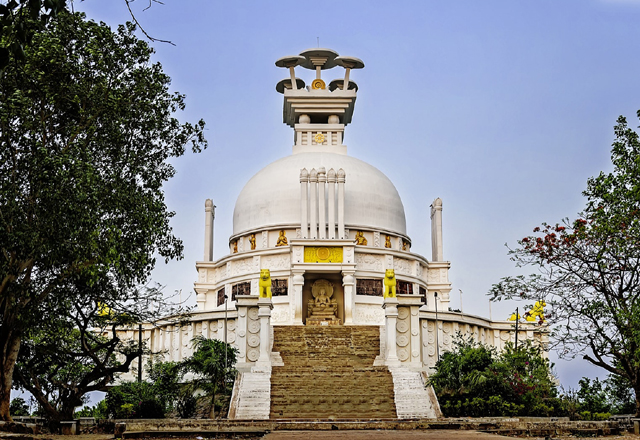 The overall structure of the stupa is in the shape of a dome. One can spot the Buddha footprints as well as the Bodhi tree over the stone panels. Over the panels, one also spots the image of Ashoka who keeps his sword of war in front of Lord Buddha suggesting that he had given up the idea of war completely. In the vicinity of this stupa, there lays a monastery named as the Saddharma Vihar Monastery, which is much visited by the Buddhist devotees. And at a short distance from the Shanti Stupa, you find the temple of Dhavaleshwar that was renovated in the year 1972 and is much frequented by Hindu as well as Buddhist devotees. Therefore, do make it a point to visit Dhauligiri and explore various Buddhist attractions that add to the sacred significance of Dhauligiri in Orissa.